The past weeks had been the adjusting-to-motherhood-week. Everyday was a learning curve. My biggest struggle was trying to get Svadhi to latch on my nipple – the breastfeeding battle – felt like I was fighting a losing battle. Since I was recovering from Cesarean delivery, the hospital gave my baby formula milk using bottle – that was so wrong! So she ended up with nipple confusion. Since she got used to bottle-feeding, she has been refusing to latch on my nipple. She wails when I try to give her my nipple. I tried doing that when she was hungry – didn’t work; then I tried when she is not so hungry – still didn’t work. It was so frustrating.

My breast was engorged after a couple of days and the savior was the Medela Swing electric breast pump – thanks to my dear friend Mani for recommending it. The breast pump did an excellent job in stimulating the milk glands and it’s very gentle on the nipple as well. As a temporary solution, I used the breast pump to express and feed Svadhi the colustrum-rich-first-milk which is rich in nutrients and antibodies. The first milk is thick and yellowish in color. I am little contented knowing that she gets all the antibodies from my breast milk and my first goal was to completely stop feeding her formula milk. And that didn’t happen overnight. Since she didn’t want to latch, it was very tiring sitting hours pumping out a small quantity of breast milk; and since babies get hungry so quickly, it felt like I was working round the clock pumping milk; so I resorted to feeding her formula milk to supplement my milk. And I learnt that unless she suckles, my milk production will eventually dwindle.

My second goal is to get her to latch so that I don’t have to express milk so frequently to bottle-feed her. I was also longing to establish the amazing bond of breastfeeding my baby. So I didn’t want to give up. Everyday I go to bed praying that tomorrow will be a better day. My husband and mother had been incredibly supportive.

1st week: Breastfeeding unsuccessful. Resorted to expressed breast milk and formula milk. 2nd week: Practiced latching – I tried using different position to get her to latch. And when she finally latched, it was painful! I was prepared for this since we attended the talk on breastfeeding and the speaker told us that it will hurt initially when the baby latches and advised to apply nipple cream to prevent from sore and cracked nipples. Everytime she latches, I will squeeze Alfred’s hand so hard and cringe in pain. The pain aside, I am thankful that baby and I are getting better at breastfeeding. On 5th November (which was Deepavali), I breastfed successfully for the whole day! Yahoooo! Effort, perseverance and determination paid off! I feel so complete as a mother now. Thank God I didn’t give up. 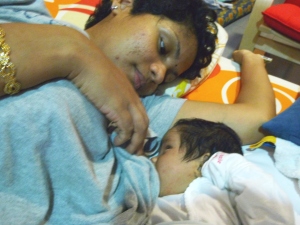 Now, she has become a pro in nursing. I nurse her lying on bed so that I don’t have to wake up so frequently at night to feed her; and she tends to doze off while suckling. It’s a win-win situation!

This entry was posted in SVADHI ELEESHA. Bookmark the permalink.