I marvel at the way she uses her imagination during unguided play. Often times I am busy with my own things, and she is forced to engage and entertain herself. No iPad, no TV and no electronic games. It’s just her and the things around her. Sometimes I find her in a role play. I ask her what is it all about. And she sets forth explaining to me in full detail all the make-believe characters  in her play. Often times I am marvelled at her level of imagination at that tender age. Her ability to comprehend the different level of relationships often leaves me dumbfounded.

It’s amazing to see what your kids come up with when left on their own devices. They are forced to use their imagination to self-play. Without any adult intervention in the learning process, it’s only then you get to realize their true potential and their ability to creatively express themselves.

I then started understanding about unstructured play. Most often than not I leave her at her own device and she will figure out new ways to engage herself. After that I engage her in a conversation. I ask her how did her day go. What did she do and etc. When I express interest in what she does, she becomes excited and her confidence in herself grows. She believes in herself and believes in whatever she does. That’s one of the greatest gift I could instil in her. To be comfortable to grow into herself and learn without boundaries. 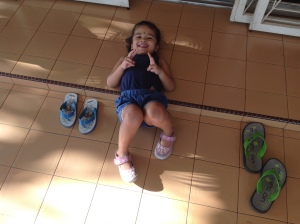 This entry was posted in LEARNING, SVADHI ELEESHA. Bookmark the permalink.